From rhubarb to robotics

Before the N&N was established in the 1700s, leeches and homemade cures, using common ingredients such as rhubarb, were the order of the day and
one highly significant medical advance had begun with early vaccination techniques for smallpox.

The 18th century saw many hospitals established in large cities and treatments improved and saw the beginnings of modern medicine. In Norfolk, public demand
grew for a county hospital at a time when journeys to London could take several days by wooden cart.

The lead was taken by Thomas Hayter, Bishop of Norwich, who asked apothecary surgeon Benjamin Gooch to visit all the hospitals in London in 1758 to learn about
their design and administration with a view to establishing a county hospital in Norwich. The designs were drawn up but in 1761 Hayter was transferred to London, where he died a few months
later.

The subscription fund was taken forward by William Fellowes, who had set up the first cottage hospital in the country with Benjamin Gooch, known as “Shotesham Infirmary”. Mr Fellowes called an open meeting at the Guildhall, Norwich, in August 1770, to discuss the project and a site for the hospital was leased.

Voluntary hospitals were characterised by their independent status and their reliance on philanthropy and other private sources of funding. The cost of the hospital was £13,323 and it had a medical staff, a matron and 20 beds were ordered. It started seeing its first outpatients on 11 July 1772 and first inpatients on 7 November 1772.

The Norfolk and Norwich Hospital was ranked high in its design and standard of practice among the many new hospitals in London. The N&N has always been a centre for the advancement of medical knowledge and the hospital’s contributions to lithotomy in the 19th century and to orthopaedic surgery in the 20th are two examples. 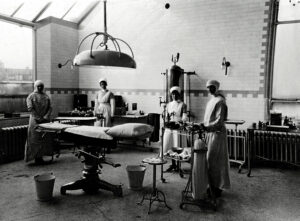 Over time, a number of separate hospitals have been incorporated into the N&N including the eye infirmary, which was established in 1823 and joined the N&N in 1925. The Jenny Lind Children’s Hospital opened on Pottergate in 1854 and became part of the N&N in 1975.

Today’s hospital in Colney Lane has over 1,200 beds and 10,000 staff, treating more than one million patients every year. It is a centre for treating heart attacks and strokes and its maternity services care for over 5,000 patients each year, specialising in complex maternal care alongside a Neonatal Intensive Care Unit. Staff in theatres have developed expertise in minimally invasive robotic surgery which is used for urology, gynaecology, head and neck and colorectal operations.