Key women in our history 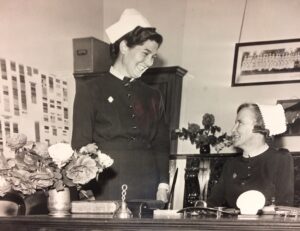 1904 –Women allowed to join the Board of Governors from October 1904. Initially this was refused but was challenged and a special meeting was called for a further vote.

CR Waley – Almoner 1907
The first hospital Almoner- her role was to see outpatients and see if they were suitable for treatment. Later she was asked to interview inpatients and to collect contributions towards their treatment from those who could afford it. The Almoner also arranged aftercare for patients leaving the hospital.

Dr. Mary Thackwell – Honorary Radium Officer 1932
Appointed as an “honorary assistant to the visiting medical staff” when NNH was made the regional radium centre for East Anglia. First women doctor mentioned in records.

First female consultant
Born 1907 as Alice Dickie. Qualified in Glasgow in 1932, one of only two women to graduate that year. Fellow of the Royal College of Obstetricians & Gynaecologists. Married Norman Townsley (Consultant General Surgeon at NN) IN 1940. President of the Norfolk Medico-Chirurgical Society 1971-72. Died 30th November 1998.