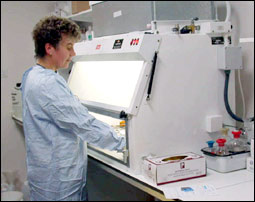 The Cytopathology Department at the Cotman Centre receives workload from James Paget University Hospital, Norfolk & Norwich University Hospital, Queen Elizabeth Hospital, Kings Lynn and General Practitioners from most of Norfolk and parts of Suffolk. As a result it is one of the largest cytology departments in the country. It receives approximately 55,000 smear tests per annum, as well as around 4,000 non-gynae tests.

Most of the preparation methods within the laboratory are automated and preparatory work is carried out by well-trained and experienced Biomedical Support Workers (BMSWs).

Cervical sample preparations are examined under a microscope to look for cells that may indicate pre-cancerous conditions of the uterine cervix. Occasionally cervical cytology is useful in identifying other abnormalities such as ovarian and endometrial cancers. 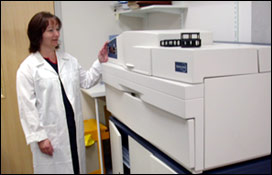 The department has been fully converted to ThinPrep Liquid Based Cytology, having been an initial NHS pilot site for this technology.

Liquid-based Cytology (LBC) samples are placed in a vial of preservative fluid instead of being smeared onto a slide. Samples are transported to the laboratory for processing and staining. Screening is then carried out as for conventional smears.

This partial automation of the process has provided  improvements in the sample quality and sample turnaround times.
LBC samples can be used to test for high risk Human Papilloma Virus.