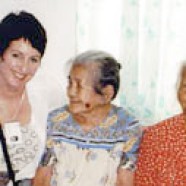 Dawn Romanos, an ophthalmic theatre nurse at Cromer & District Hospital's Allies Day Procedure Unit, gave up a week's holiday earlier this year to work as a volunteer with the ORBIS Flying Eye Hospital in the Phillipines.

She explained: “Our patients here in Cromer are lucky to get treatment before their cataracts get too advanced, but in the Philippines there are simply not enough skilled people or resources to go around. ORBIS is geared towards teaching the local doctors and nurses the skills they need to carry out this type of surgery themselves.

“The Flying Eye Hospital is equipped with an operating theatre and an auditorium where the audience can watch live pictures and ask questions while the procedure is being carried out.

“It was heartbreaking to have to turn patients away but we consoled ourselves with the thought that their turn would come. The great thing about ORBIS is that the local teams are now able to carry on where we left off.

“Most of the procedures I assisted with were cataract operations, but we also did a simple squint correction for a young girl. She was overjoyed because she would now be able to marry –  even though she was very pretty, she was rejected because of her squint.”

Dawn first heard about ORBIS at a conference three years ago. “It seemed a great way to get personally involved in a charity,” she recalled. “She has no regrets about giving up a week's holiday to join the Flying Eye Hospital team. “It was hard work but a fantastic experience and I'd love to do it again.”

ORBIS, the blindness prevention charity, trains local doctors, nurses and their communities to prevent and treat avoidable blindness through its Flying Eye Hospital and hospital-based programmes. The training is carried out by medical volunteers from all over the world, who give up their time for free to pass on invaluable skills and knowledge to their colleagues in the developing world.

ORBIS has been working in the Philippines since it launched in 1982, and the Flying Eye Hospital has since visited the country eight times. An estimated 500,000 of the Philippine population are blind and a further 1.3 million live with severe visual impairment. And as in most other developing countries, 80 percent of the causes of blindness are preventable or treatable.

Since its launch in 1982, ORBIS volunteers have treated thousands of patients, trained more than 63,000 local health professionals, who have then gone on to train their colleagues, creating a ripple effect to give sight back to millions of people.

Notes to the Editor: