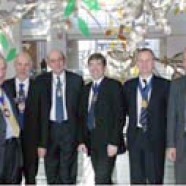 Ever since the foundation of the Norfolk and Norwich Hospital in 1771, the N&N has had a tradition of doctors making their mark on the national stage, reflecting both the reputation of the hospital and the calibre of its staff.

That tradition is more than alive and well at the Norfolk and Norwich University Hospital, which currently employs 232 consultants, more than double the number the old hospital had 10 years ago.

For 2004 has seen a record number of N&N physicians and surgeons leading national professional medical bodies. The NNUH “Magnificent Seven”, (photographed left to right, with the exception of Dr Paul Jenkins) are:

Hospital chairman David Prior said: “It's a great testimony to the skill and calibre of our medical staff that so many of our senior consultants are playing a proactive and important role at a national level for so many of the professional medical bodies.

“NNUH is at the forefront of modern medicine and surgery and to have doctors held in such high regard nationally is not only a feather in the cap for Norfolk, but is also hugely beneficial for our patients who enjoy access to some of the best staff and facilities in the country.”