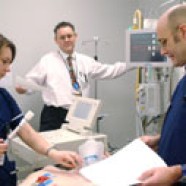 The Norfolk and Norwich University Hospital is one of the top performers in the country for quickly administering a lifesaving drug treatment for heart attack victims within a ’vital golden half hour’.

Latest figures from the Department of Health show NNUH has one of the best “door to needle” times in the NHS – with 92 per cent of heart attack patients being given thrombolysis drugs by injection within half an hour. Thrombolysis is only suitable for those people who have definitely had a heart attack – otherwise the drug may harm them.

That makes the skilled job of diagnosing the need for thrombolysis early and administering the drug quickly especially important. The improvement in performance is down to the hard work and dedication of the hospital A&E and Coronary Care staff working with East Anglian Ambulance paramedics and the Anglia Coronary Heart Disease collaborative. A series of recent changes has led to the recent record performance including:

“Our door to needle times have improved dramatically over the last year and although the development of nurse led thrombolysis has helped as well as the introduction of ECG telemetry from the ambulance paramedics, by far the most important factor has been the close co-operation between the Thrombolysis Nurses on our Coronary Care Unit and the staff in the A&E department which is where the majority of patients with myocardial infarction arrive.

"Thanks to this close co-operation and the enthusiasm of members of the A&E staff there is now a general awareness that seconds saved here and seconds saved there all add up and that in particular it is vital to get an ECG performed within minutes of the patient's arrival and then equally important to get it seen immediately by someone capable of making the decision to thrombolyse," said Dr Tony Page, clinical director for Cardiology, Norfolk and Norwich University Hospital.