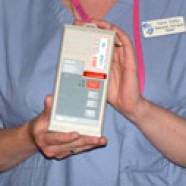 Staff who care for premature babies at the Norfolk and Norwich University Hospital are calling on parents to return up to £16,000 worth of baby breathing alarms that have not been returned.

Up to 40 apnoea alarms have been loaned and not returned to the hospital’s Neonatal Intensive Care Unit (NICU). The alarms are given to families who have had premature babies or have had a history of cot death in the family and will sound an alarm if the baby stops breathing.

Neonatal outreach sister Carol Gubby said: “Parents may have simply forgotten they have apnoea alarms or they may be embarrassed about bringing them back but we would be really grateful to have them returned.”

A recent inventory check has revealed up to 40 alarms have not been returned. Each alarm costs around £400 to buy.

NNUH is home to one of only two highly specialised Level 3 Neonatal Intensive Care Units (NICU) across Norfolk, Suffolk and Cambridgeshire (the other centre is at the Rosie Hospital in Cambridge).

Last year the hospital’s NICU staff cared for 1486 babies, some born as young as 23 weeks old, and weighing just over one pound.

Anyone wanting to return an apnoea alarm should contact Sister Carol Gubby on 01603 286867.