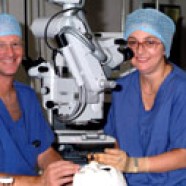 Eye surgeons from Norwich are exchanging knowledge and skills with colleagues from the war-torn Bosnian city of Sarajevo.

And an eye surgeon from Sarajevo, Dr Sanida Ljaljevic, whose special interest is in glaucoma management, is currently visiting the Norfolk and Norwich University Hospital under an exchange programme. Dr Ljaljevic’s visit to Norwich has been sponsored by Ophthalmic Aid to Eastern Europe.

The eye department in Norwich is now looking to establish an ongoing formal link between Norwich and the Sarajevo University Eye Clinic. Dr Ljaljevic has been able to observe at first hand ophthalmic medical and surgical care as practised in Norwich under the supervision of ophthalmology consultants Nick Astbury, David Broadway, Colin Jones, Tom Eke and their teams.

Mr Astbury said: “Our aim is to improve training and hence the quality of eye care in a part of the world which is under-resourced and still recovering from four years of war from 1992 to 1995.

“Norwich is the first hospital to establish such a link and we are hopeful that we can raise the profile of Norwich and its university hospital by developing a strong partnership between the two departments.”

Nick Astbury visited Sarajevo in 1996 immediately after the war as part of the UK Med’s Operation Phoenix. During the four years of war (1992-1995) in the Republic of Bosnia and Herzegovina a total of 29,461 seriously injured patients attended the two Sarajevo hospitals (one in 10 of the population).

There were 933 eye injuries recorded, a third of which were penetrating injuries (22% with intraocular foreign body). Four times that number had ‘minor’ injuries that also required treatment. The hospital functioned for most of the time without electricity and running water, without heating and with insufficient staff to cope with the injuries, let alone with the normal eye complaints of a wartime population of 300,000.

The Sarajevo hospital complex as a whole was hit by more than 2000 shells and the eye clinic itself by eight. Fortunately no patients or eye clinic staff were killed or injured as they had evacuated to the basement.