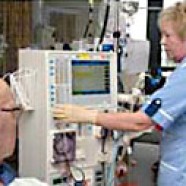 Renal patient Clifford Shinn is so looking forward to dialysis treatment at a new unit opening in Cromer next year he is busy helping fund raise for creature comforts for the new centre.

Clifford, 85, of West Runton, currently travels 168 miles a week for dialysis and the Cromer unit will reduce that to a journey of just 18 miles a week. He has been dialysing since August last year 2004 on Langley ward's bay for north Norfolk patients at the Norfolk and Norwich University Hospital (NNUH).

Mr Shinn, served as an engineer with the Royal Navy during the second world war, and went on to work for the world-famous Harrods department store and introduced computers to Harrods. Now a lay preacher, Clifford is still very active and believes strongly that “You mustn't give up learning”.

Now he and the Langley Seasiders, as north Norfolk patients who currently dialyse at NNUH are known, are clubbing together to raise funds for extras for the new Cromer renal unit that will open in February 2006.

Clifford has even written a poem, titled The Seasiders, inspired by his fellow dialysis patients.

Three times each week we have to go
To meet with Angie and our Mo'
Altogether, what a rally
Always led by cheerful Sally
Some to a bed, some to a chair
Under Janet's tender care
You may have needles or a line
To clean the blood and keep you fine.

Watch the telly or read a book
But Nikki is always worth a look
Sandwiches, salmon, ham or cheese
Freshly made and sure to please
Cups of coffee or sweet tea
soon we will all be by the sea
But until then we have to go
to meet with our Angie and Our Mo'

Clifford said: “I'm 85 but I feel 70. I have travelled the world and been in nine hospitals in my time and this is the one. It's of a very high standard and the atmosphere on the ward is a healing one. We're very well looked after.

” But we are all really looking forward to the new unit in Cromer and we want to make a contribution towards the cost of the little extras such as pictures, books and magazines that will make a difference for us on our thrice-weekly visits.”

Sister Judy Butcher said; “Clifford is an inspiration to us all. I just hope I've got as much energy when I'm his age. It's great that our north Norfolk patients are looking forward to the new unit and fundraising for little extras for it.”