One month to go in countdown to smoke free hospitals 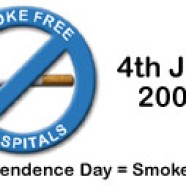 The countdown has now begun for a ban on smoking at the Norfolk and Norwich University and Cromer hospitals.

From Monday 4 July, all Norfolk and Norwich University Hospital NHS Trust premises will become smoke free and staff and patients are being supported in their attempts to kick the habit.

At NNUH, the smoking shelters will be removed on 4 July and will be re-sited in the public car parks to be used as wheelchair shelters. Meanwhile, in Cromer, a smoking room previously available to staff will now be closed.

The Trust is working closely with Cignificant, the free NHS stop smoking service, to ensure that all staff and patients get the support and advice they need to help them give up.

Teresa Cardene, a personal assistant to a chest physician in Respiratory Medicine, is among Cignificant’s success stories after she joined a support group at Norfolk and Norwich University Hospital. She says: “I am still amazed that I have not had a cigarette for almost six months, having smoked since my early teens some 25 years ago!  I am proud to have quit and no longer feel that I am ‘missing out’ on anything, as I have gained so much.

“I no longer have to think, ‘When will I get my next cigarette?’ or ‘Where can I light up without feeling like an outcast?’  which were frequently asked questions throughout my daily life. This has resulted in my stress levels actually decreasing and my newfound energies being channelled into more positive thoughts.”

Smoker Sue Hayward, hospital administrator at Cromer Hospital, who has worked at the hospital for 30 years, says the number of staff who smoke has declined dramatically in recent years. “The smoking room is two floors up in the eaves and is hardly every used – most smokers tend to gather in a courtyard at the back of the hospital.

“In my view, 99 per cent of smokers wish they weren’t, so this will be a good opportunity for us to smoke a bit less!”

Serco UNISON official Terry Davies smoked 40– 45 cigarettes a day before starting a support group called ‘Kick It’ a year ago. The group was later taken over by Cignificant and he is full of praise for their help and support.

“Out of 29 people who joined the group, 21 are still smoke-free,” he says. “The Cignificant people are marvellous – they can offer nicotine replacement therapy and counselling which was really useful.”