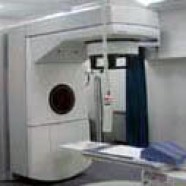 The cancer centre at the Norfolk and Norwich University Hospital has been awarded an international honour for helping test a new hi-tech imaging technique used in the treatment of cancers.

During this time, the results of evaluation and testing of the new techniques have been presented in Europe and the USA by staff from the hospital's Oncology and the Radiotherapy Physics departments.

Now the hi-tech imaging technique will be put to use elsewhere in the world. The Radiotherapy centre at the Norfolk and Norwich University Hospital has been presented with an award for Radiation Oncology Leadership at a major international meeting in the USA. The award was presented by Varian Medical Systems at the annual meeting of the American Society for Therapeutic Radiology and Oncology (ASTRO) held in Denver, Colorado.

The president of Varian Medical Systems Dick Levy said: “The radiation oncology centre at the Norfolk and Norwich is truly recognised as a leading centre in the application of new technology in the fight against cancer. Their commitment and drive for perfection enables everyone to benefit from enhanced technologies.”

Jenny Tomes, head of radiotherapy at the Norfolk and Norwich, explained that: “The cone-beam CT imaging capability helps doctors pinpoint the exact location of the tumour. It is especially useful when the tumour is far from any bony landmarks, and hard to distinguish from surrounding soft tissues. Having access to volumetric cone-beam CT data has the potential to significantly improve tumour targeting in these difficult cases. It offers doctors different kinds of information about the tumour to be treated, and facilitates automated patient positioning just prior to treatment”.