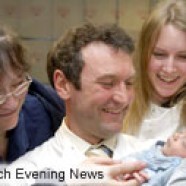 A Norwich mother of two has paid tribute to the behind-the-scenes biomedical scientists at the Norfolk and Norwich University Hospital who helped save her unborn son's life.

Eight-week old Kaden Adams owes his life to the biomedical scientists who spotted a life-threatening problem as they analysed his mum's routine blood sample when she was 34 weeks pregnant.

Mum's blood is O RhD negative but a small number of O RhD positive cells were present. NNUH biomedical scientist Rob McPherson explains: “We had a routine blood sample for a lady who was 34 weeks pregnant and when I analysed it there seemed to be cells from two different people in the blood. This can happen if you've had a bone marrow transplant, if the blood sample has been mixed with someone else's inadvertently, or if the baby is bleeding, which is termed a foetal maternal haemorrhage.

“I immediately asked her midwife for another sample and good teamwork in the lab meant we were able to carry out a manual Kleihauer test and that confirmed there was a large number of the baby's blood cells present in the mother's sample. I bleeped the obstetric and haematology consultants and armed with the results they immediately decided to get the mother into theatre for a caesarean section.”

Speed was of the essence and the obstetric team immediately swung into action. When Kaden was delivered an FBC (Full Blood Count) test was sent to the labs and it revealed baby's haemoglobin count was 3g/dl (a normal level for a newborn is 17-20 g/dl) and the paediatric team ordered an urgent O RhD negative blood transfusion.

Mum Karen, 32, was taken aback at the speed at which things happened. From attending the Pregnancy and Wellbeing Service (PAWS) because baby did not seem to be moving much, events moved quickly and she was shocked to be told she going in for an emergency caesarean section.

“It all happened so fast. I had my four-year-old daughter with me and I just wasn't expecting it. The staff were wonderful and they looked after my daughter whilst I went to theatre. He was white as a sheet when he was delivered but my first thought was that he looked like his big sister,” she said.

Kaden spent two weeks in the hospital's Neonatal Intensive Care Unit and went home to his family on March 1.

“I can't thank all those involved enough, they were brilliant and saved my baby's life. Kaden's perfectly fine now, he's a little fighter and he's absolutely beautiful,” said Karen.

The scientists at the Norfolk and Norwich University Hospital not only analyse all the hospital's tests but also do the analyses on the samples from most of Norfolk's GPs. In the course of a day the team will analyse samples from over 1,000 individual patients from local GP surgeries alone. This represents approximately 4,000 to 5,000 samples every day.

For biomedical scientist Rob McPherson the events of February 16, 2006 will live long in his memory; “It is a wonderful feeling to be part of a team that worked so well together and helped save a baby's life. This was definitely one of the most rewarding and memorable days of my career”.

Paul Forden, chief executive, said “Our hospital doctors and local GPs rely heavily on the unsung staff who work in our laboratories. The public know very little about these scientists but they really are lifesavers as we have seen in Kaden's case. Up to 60 per cent of all the diagnoses doctors make depends on the diagnostic work done by our biomedical scientists and they deserve our thanks and recognition.”