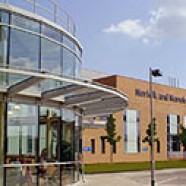 The technique allows patients to return home on the day after surgery without the need of a drain, as opposed to a hospital stay of between two and seven days with traditional surgery.

The NNUH started sentinel node biopsy in  June 2005 and more than 150 patients have so far undergone the new biopsy technique. A sentinel node biopsy involves removing only the first draining lymph node or nodes in the armpit, rather than taking the majority of the nodes which may lead to arm swelling and numbness.

The procedure involves using a dye and a small dose of radioactivity to locate and examine the first gland in the drainage pathway, called the sentinel node, that drains directly from the tumour. If the gland is clear, as it is in around 75% of patients with screen-detected cancer, there is no need to remove the other 20-30 nodes.

Recently published research from Cardiff University showed those women who had the new style of biopsy saw a 70% reduction in arm swelling and a 60% reduction in pain*.

Consultant breast surgeon Mr Simon Pain said: “This is a wonderful new technique which greatly reduces the side effects of surgery for more than half of our breast cancer patients, and is one of many new developments at NNUH which offers Norfolk women the best possible treatment for their breast cancer.'

Sentinel node biopsy is used extensively in North America and in Europe but is only currently used at 30 cancer centres in the UK. Consultant breast surgeon Mr Gabor Peley, a Hungarian, who has many years experience of this technique at the National Institute of Oncology in Budapest, has recently joined the NNUH surgical team.

In the UK, the lifetime risk for breast cancer in women is one in nine. It is the most common cancer affecting women in the UK, with more than 38,000 new cases each year.

*Published May 2006, Journal of the National Cancer Institute – http://jncicancerspectrum.oxfordjournals.org/cgi/content/abstract/jnci;98/9/599