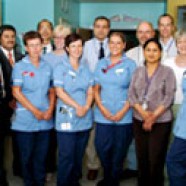 A joint research project under the leadership of Mr Azad Mathur involving paediatric surgeons and nurses at the Norfolk and Norwich University Hospital and a University of East Anglia lecturer has won a prestigious medical prize for a research project that benefits children undergoing operations to remove their appendix.

The paediatric surgical team at NNUH worked with nurses on the children's ward and UEA School of Nursing and Midwifery lecturer Dr Michael Pfeil to change how quickly some children who have their appendix removed can be allowed to return home.

Traditionally, children who have had their appendix removed (appendicectomy) without complication would stay in hospital for two to three days and the Norwich project has proved they can safely go home in just 24 hours.

The “Home Next Day” research project is, however, not suitable for all patients. Those who have complicated appendicectomies do still need to stay in hospital for a longer period and this accounts for around 30 per cent of the appendicectomies done at NNUH.

The first phase of the  research project involved 25 children who had straightforward appendicectomies and who went home 24 hours after their operations. Each patient was visited within 24 hours after discharge by a children's outreach nurse followed by a telephone call. Ten days later  their parents were interviewed over the phone by Dr Pfeil.

Dr Pfeil said “One of the strongest aspects of this research lies in its multidisciplinary approach. Surgeons and nurses contributed in equal parts, enabling the families to take their children home earlier than would have been previously possible.”

The results from the first phase were very positive and the second phase introduced a telephone follow up call 24 hours after discharge, plus a telephone call by Dr Pfeil within two weeks of discharge.

And last week at the British Association of Paediatric Surgeons International Congress held in Stockholm, Sweden, it was announced that the Norwich research has won the prestigious Grant Memorial Prize, jointly awarded by BAPS and the Association of British Paediatric Nurses.

Lead consultant paediatric surgeon Mr Azad Mathur said the “Home Next Day” research project, which has now involved 75 children in total, has proved very beneficial and it was doubly pleasing to have won the Grant Memorial Prize.

“The objective was to deliver the safest possible care for those children who had uncomplicated appendicectomies and allow them to go home within 24 hours after surgery. We work to very strict criteria and our research shows it does work and we are very delighted to have won this prestigious prize,” said Mr Mathur.