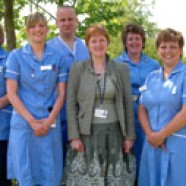 A man who was expelled from school at 15 and two mums in their mid-forties are among the latest intake of newly qualified staff nurses at the Norfolk and Norwich University Hospital.

Six of the graduates were nursing auxiliaries before being seconded to the University of East Anglia (UEA) under a scheme that gives hospital staff a chance to become full-time nursing students, with financial backing from the Strategic Health Authority and encouragement from the NNUH’s practice and development team.

Owen Watkinson, 28, was especially proud to achieve a diploma in nursing as he was expelled from school in Dereham at 15 for ‘messing about’. “I did some really stupid things at school but a lot of it was frustration – I was later diagnosed as borderline dyslexic. “I still find academic work a struggle but it’s been worth it because I’m really enjoying my new responsibilities as a staff nurse on Dunston Ward. I’m learning a lot about dermatology and the staff are really supportive and encouraging.” Owen was a care worker before becoming a nursing auxiliary at the former West Norwich Hospital, where he met his wife, Lisa, who has since qualified as a midwife.

Sue Fitt, from Spixworth, was “just a mum” until she discovered a love of learning in her forties. She has now achieved a first class degree at the age of 45 – long after she left school with three O levels. She worked as an auxiliary for more than 10 years and was persuaded to study for an NVQ in healthcare when the last of her three children started school. “I’d now like to be involved in nursing education and to be a role model for other nursing auxiliaries,” she says.

Cathy Hollett, 44, a mother of two from North Walsham, says she has to keep pinching herself to believe she is a fully qualified nurse. She was a nursing auxiliary for 20 years before she began studying in her spare time. “Now I feel I can offer a lot more to the patients because I have the knowledge to back up my practical skills. I’m working on Edgefield Ward and learning more about urology every day,” she says.

Kami Hurren, 27, is originally from the Czech Republic but settled in Norwich while travelling in the UK. “I was the only non-English speaker on the course and had to work hard to keep up with the other students, even though I already had A levels from the Czech Republic,” she says. “Still, I am very determined when I decide to do something and the hospital was very supportive.

Emma Wade, 24, from Easton, always wanted to be a nurse but when she embarked on a nursing degree course at Birmingham University she hated living away from home. She took a job as a nursing auxiliary at NNUH and applied to the UEA ‘on the off-chance’ of getting a place.   “It’s definitely not an easy option because you are working shifts and writing essays while other students are out enjoying themselves,” she says. “However, I regard it as a real privilege to work with patients.”

Jill Tennant, 33, joined the old N&N as a nursing auxiliary in 1992 and gained experience in orthopaedics, cardiography and A&E before taking up the chance of a secondment to the UEA. She feels ‘satisfied and very privileged’ to have qualified at last with a diploma in nursing. “I’m not academic but the secondment gave me the support I needed to make progress in my career.”