Pioneering screening picks up 36 with cancer 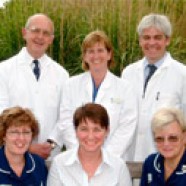 A groundbreaking bowel cancer screening programme launched at the Norfolk and Norwich University Hospital six months ago for people aged over 60 has already identified 36 people with cancer and removed pre-cancerous polyps in another 84.

The Norwich bowel cancer screening centre was only the second of six screening centres to be rolled out in the first wave of the NHS Bowel Cancer Screening Programme in England: the first of its kind for a cancer that affects men and women equally in the UK. The NNUH screening centre also has one of the highest take up rates in the country at 73 per cent.

From July 2006, people from Norfolk, aged between 60 and 69, have been invited to participate in bowel cancer screening. This involves taking a simple test – known as a Faecal Occult Blood (FOB) test – which can be done safely in the privacy of people's own homes. People aged 70 and above can also ask for a kit.

If the test comes back with a positive result – which doesn't necessarily mean the person has bowel cancer – they then see a screening nurse at NNUH for a colonoscopy (picture of the screening team, right). So far 182 people from across central Norfolk have had a colonoscopy as a result of the new Norwich screening programme.

Consultant gastroenterologist Dr Richard Tighe said: “We would urge everyone over the age of 60 who receives a kit from the screening programme to please complete the test. Based on our figures to date, we are picking up one cancer per week, and have uncovered and removed pre-malignant polyps in another two people each week. For every one cancer detected, we are ruling out another two people who have had normal tests. We strongly recommend that anyone eligible to take part does so, and that anyone over 70 with any concerns requests a kit by contacting the freephone number 0800 707 6060.”

70 year old Ray Middleton of Poringland, near Norwich who took part in the Programme, said: “My wife died of bowel cancer so I know how painful and drawn out the suffering can be. This new programme is amazing, the test kit came through the post, and I sent it off and was asked to come in for a further test. I went to the Norfolk and Norwich University Hospital screening team and they were brilliant. I had a cancerous polyp, which was removed, and I'm okay now. The programme saved my life. I want to tell everyone who gets sent the test not to hesitate.”

For more information about the Norwich screening centre visit www.nnuh.nhs.uk/dept/bowelcancer

Awareness-raising events are also being planned to be held at the Norfolk and Norwich University Hospital for Bowel Cancer Awareness month in April.

The NHS Bowel Cancer Screening Programme is being introduced following the success of pilot studies in Coventry and North Warwickshire and Scotland.

The test used to screen for bowel cancer is called a Faecal Occult Blood (FOB) test and analyses samples of bowel motions for tiny traces of blood that may be invisible to the naked eye. A kit is used to collect small samples of bowel motion on a special card. The samples are then sent to the laboratory for analysis. The test does not diagnose bowel cancer but gives an indication as to whether further investigations are required. An abnormal FOB test result can occur for a variety of reasons including piles (haemorrhoids) or stomach ulcers.

All men and women aged over 60 are eligible for screening every two years. Those aged 60 to 69, and registered with a GP, are automatically invited and will receive an FOB test. Those aged 70 and over are strongly encouraged to request a test kit by calling the freephone helpline on 0800 707 60 60.