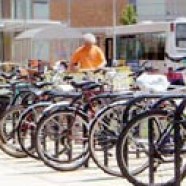 Dozens of pedal cycles belonging to staff at the Norfolk and Norwich University Hospital (NNUH) have been security marked over the last few weeks in the latest phase of a police campaign to put the brakes on cycle crime.

Officers from the local community policing team attended the NNUH last month (August) and are due to attend again on Friday, September 21, between 11.30am and 2pm. Dr Bike will also be offering free cycle safety checks.

Dozens of cycles were security-marked at the last visit and the team are hoping for the same success this week. Details of both the cycles and their owners will be logged onto the new database which was launched as part of the Operation Brakes cycle campaign. The benefit of the database is that it will enable police to reunite stolen pedal cycles with their rightful owners and it will also enable officers to quickly establish that a cycle has indeed been stolen.

Simon Wardale, Travel Co-ordinator at the Norfolk and Norwich University Hospital, said: “We are keen to encourage as many staff as possible to cycle to work and we are very grateful to Norfolk Police for helping hospital staff security mark their bikes”.

PCSO Tim Philpott said: “Mr Wardale and his colleagues at the hospital were aware of the work being done across the Norwich area to drive down pedal cycle crime and they were keen to get involved with Operation Brakes.

“Some 200 members of hospital staff cycle to work during the week and we were more than happy to assist with security-marking and general crime prevention advice.”I hope our visits have been helpful to staff and will help them to keep themselves and their pedal cycles safe.”

Operation Brakes was launched in June in order to deter and detect pedal cycle crime in Norwich. A range of work has been carried out in the last few weeks including more than 1,000 pedal cycles being security-marked in Norwich city centre, dozens of stolen cycles being seized and a number of individuals being arrested in connection with theft and handling stolen goods.