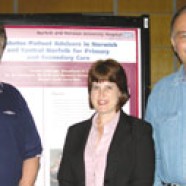 Two of the patient advisers from the Norfolk and Norwich University Hospital will be on hand at the Tesco superstore in Blue Boar Lane to raise awareness about the condition on World Diabetes Day, Wednesday 14 November.

Nearly 22,000 people in Norfolk have been diagnosed with diabetes and the figure is rising by around 2,000 a year.

Led by patient champions Dave Rea and Martin Land from the diabetes network, our 13 patient advisers are all volunteers who give up their spare time to listen to callers and provide information and advice by telephone to people with diabetes.

The service is sponsored by the Central Norfolk Integrated Diabetes Management Group and was the first of its kind in the mainland UK when it was launched in 2005. In the last two years the patient advisers have taken 150 calls from members of the public, and is now the busiest in the UK

“As health professionals, we can offer medical advice but we don't know what it's really like to live with diabetes – we are lucky to have such an enthusiastic group of volunteers who are willing to offer our patients a different perspective. The advisers give advice based on the shared experience of having diabetes,” says NNUH diabetes specialist Professor Mike Sampson.

“The calls can be anything from 'Can I use honey in place of sugar,' to a desperate please for help from someone who is suffering a full-blown hypo attack,” says diabetes patient champion Dave Rea, from Norwich.

“We deal only with non-medical enquiries but there's fantastic back-up from the hospital if we need it. We work closely with diabetes network manager Angela Young and the rest of the diabetes team, and we each have a mentor in the health service that we can rely on for help and support.”

“Many of the calls come from parents of teenagers who refuse to be sensible about their diet and medication,” explains Martin Land, from Wymondham, who has Type 1 diabetes. “Having brought up two sons with the condition, I can sympathise but I find it's much better to keep positive and explain the benefits of maintaining a healthy lifestyle rather than focusing on what will happen if you don't.

“It can be tiring as some of the calls last for up to an hour, but it's also very rewarding when you know you have helped someone. The way I see it is that it takes a lot of guts to pick up the phone and call the helpline number so the least we can do is call them back and listen to what they have to say.”

How the diabetes advisory service works: