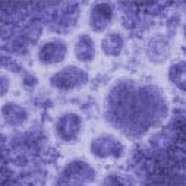 Norovirus is now circulating widely in the local community so people are being reminded to stay away from the Norfolk and Norwich University Hospital if they have been in recent contact with the tummy bug.

Microbiology reports show the virus is now very active in the Norwich area and is affecting schools, playgroups, residential and nursing homes.Norovirus is most common cause of infectious gastroenteritis in the UK and is most prevalent during autumn and winter.

Norovirus causes nausea and/or diarrhoea and is easily spread in places where group of people are in close proximity for reasonable amounts of time such as schools, residential homes, hospitals and workplaces.

The viral symptoms last around two days and no treatment is required. However, even after the symptoms have cleared people can still carry the virus and infect others up to three days after their own symptoms have stopped.

Dr Judith Richards, consultant microbiologist at the Norfolk and Norwich University Hospital, said: “It's very important that people who have had the virus, or been in close contact with someone who has had it, take precautions to avoid spreading it. That means not going back to work or school until three days after the symptoms have stopped. People should also avoid visiting places like hospitals and residential homes if they have had the bug or been in contact with it over the past three

We also recommend, as a matter of routine, that all visitors should wash their hands with hot water and soap because alcohol gel is only effective against some bacteria, although not against gastrointestinal ones (such as Clostridium difficile), and not all viruses”.

How is norovirus treated?
There is no specific treatment for norovirus apart from letting the illness run its course. It is important to drink plenty of fluids to prevent dehydration.
If I’m suffering from norovirus, how can I prevent others from becoming infected?
Good hygiene is important in preventing others from becoming infected – this includes thorough hand washing before and after contact. Food preparation should also be avoided until three days after symptoms have gone altogether.

When can I visit if I’ve had the virus/been in contact with someone who has had the virus?
If you have been free of the symptoms mentioned above from more than 72 hours or the person/s you have been in contact with has been free of the symptoms then it is acceptable to visit the hospital. If your symptoms are more recent than that we strongly recommend that you don’t visit. IF IN ANY DOUBT PLEASE DON’T VISIT.