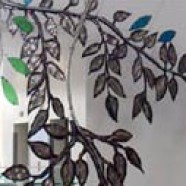 Thanks to spinal surgery at the Norfolk and Norwich University Hospital, Nigel Arnold is now not only able to walk again but is running the London Marathon to raise funds for the department who put him back on his feet.

This time last year Nigel Arnold was not able to walk, let alone run and was admitted to the NNUH with a spinal canal stenosis  at L4/5 due to large disc herniation and was operated on by Mr Lennel Lutchman , consultant orthopaedic surgeon and team. The surgery involved an operation lasting a couple of hours and four days in hospital afterwards. The operation of the Lumbar Spine Disectomy involved removing a disc pressing into his nerves causing Nigel not to be able to walk any distance and having to sit down for relief.

After being diagnosed with spinal canal stenosis Nigel never thought he would be able to run again let alone run this years London Marathon. Running was so important to Nigel it even helped him through the loss of his first wife. Nigel has always been a keen runner, running for Norfolk Gazelles and in the past he has won various prestigious races in his time including representing Great Britain at the Duathlon Olympic distance (10k run, 25mile bike, 5k run) winning a Gold medal in Tasmania, Silver medal in Dallas and European Silver medal in Poland between 1993 and 1997. He has also won various Norfolk, Eastern, Southern County Athletic Championship medals for Track, Road, Cross Country including National Masters Bronze medal for 10,000 metres on the track.

Nigel Arnold said “If I had not had an MRI scan which revealed how serious my back was I would still be waiting in a dangerous situation and maybe ended up in a wheelchair. I had already soldiered on for 5 months in a lot of pain.

“By way of thank you I want to raise monies for the unit as I never imagined in a million years that I would be able to run again and am so grateful Mr Lutchman and his team for the treatment I received which was just first class and it means so much to me to be able to running again. “

Mr Lennel Lutchman said “We delighted that he has recovered so well after this operation and it is a great morale boost to the team that Nigel now wants to raise monies in this way for the department”.