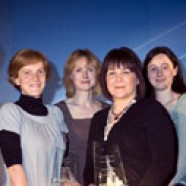 Teams from the Norfolk and Norwich University Hospital have once again scooped top awards for innovation at the Health Enterprise East competition, announced at a ceremony held at Duxford's Imperial War Museum.

The first prize was won by a dermatology team headed by specialist nurse Carrie Wingfield, whose one-stop clinic is setting a new trend in the treatment of patients with lower-limb cellulitis.

Also among the winners was a medical student from the UEA, Beatrice Lyons, whose child-friendly blood glucose meter won the Medical Technology award.

Patients with lower-limb cellulitis require intravenous injections of antibiotics and were previously treated in the emergency assessment unit as in-patients. Now they attend a specialist dermatology clinic and can be treated as out-patients or at home. This means a more accurate and rapid diagnosis, which reduces the risk of recurring episodes of cellulitis or delayed treatment for skin disease.

The patients receive specialist follow up and discharge advice, and some have antibiotic treatment in their own homes with the help of community nurses trained to provide IV therapy (ie intravenous injections).

Since the clinic was set up on Dunston Ward a year ago, some 75 patients have been diagnosed with lower-limb cellulitis and only eight needed to remain in hospital. It’s thought the NHS could save around £79 million nationally by reducing the number of bed days for patients with this condition.

“The clinic is the result of close collaboration with specialists from the Emergency Assessment Unit and our partners in the Primary Care Trust,” said Carrie Wingfield, a nurse prescriber and specialist dermatology nurse at NNUH.

“Patients prefer to be treated this way as it means they don’t have to stay in hospital but at the same time they are getting the medical help they need to treat their condition.”

Diabetes is the most common chronic illness in children and failure to comply with insulin therapy can lead to serious complications in later life. Beatrice Lyons’s child friendly blood glucose meter is designed to take the pain and irritation out of finger-prick tests and encourage more children to comply with their insulin regimes.

Four of the 15 teams shortlisted for awards were from NNUH – the highest of any other trust in the East of England, Other innovative ideas developed at NNUH included an eye dropper for patients to administer their own eye drops and a “serious game” to help surgeons to develop their laparoscopic skills.

This is the second year running that NNUH has won the top award for innovation in the East of England.