Meet the machine that kicks your heart into life 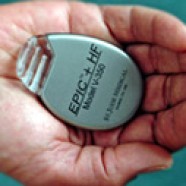 Norfolk heart patient Charlotte Dix is backing an awareness-raising week that highlights a range of conditions where the treatment can be an MP3 player-sized machine installed under the skin that can kick start a heart back into life.

Each year an estimated 400 people under the age of 35 die suddenly from sudden cardiac death – often caused by a heart rhythm disorder known as an arrhythmia. This equates to around eight deaths a year in Norfolk in this age group.

A simple ECG test can often detect the condition and lead to further investigation. Once diagnosed, arrhythmias can be treated with drugs. In some high-risk cases, a device known as an implantable cardioverter defibrillator (ICD) may be fitted to jolt the heart back into a normal rhythm when a dangerous problem occurs.

In June 2006 the Norfolk and Norwich University Hospital launched an ICD service and previously patients would have to travel to Cambridgeshire for specialist treatment but now this and their subsequent follow-up care can be provided at NNUH.

What an ICD can do:

Around four patients a month are fitted at NNUH with an ICD and the hospital looks after around 350 out-patients who have an ICD fitted. Patients range in age from late 20s to their 80s. Most are implanted in people who have previously had a heart attack and who may be at risk of arrhythmias.

Charlotte, 28, a mother-of one from Norwich, collapsed suddenly at work with a cardiac arrest three years ago and was resuscitated by her work colleagues using an external defibrillator. She had her first ICD implanted at the Royal Brompton Hospital in 2006.

Charlotte said: “I have to think of my ICD as my invisible friend. You can't see it, it's not uncomfortable and it doesn't really affect anything I do.” Charlotte has experienced being defibrillated by her device and said it was like getting a huge thump in the chest. “It was completely without warning and it really felt like I'd been kicked in the chest. It's a very strange thing but I'm getting used to it.”

Next week is national Arrhythmia Awareness Week (9th-15th June) and Simon Bowles, arrhythmia nurse specialist at the Norfolk and Norwich University Hospital, will be on hand to answer questions about this little-known condition.

“Arrhythmia is something most people know very little about but it is one of the biggest causes of death nationally, outstripping lung cancer, breast cancer, HIV/AIDS and stroke combined.. Arrhythmias in some form affect more than one million people in the UK but once diagnosed they can usually be treated successfully”, said Simon.

Arrhythmias are most commonly suffered by older people as a result of heart attacks or congenital heart disease. These may vary from relatively benign atrial arrhythmias such as atrial fibrillation to potentially dangerous ventricular arrhythmias. However, young people with the potential for an arrhythmia may be unaware of any symptoms and often lead very active lives before being affected.

An Implantable Cardioverter Defibrillator is a small metal generator attached to one or sometimes two leads which are connected to the heart normally via the veins. The leads monitor the heart rhythm. If the heart rhythm becomes erratic or very fast the ICD delivers an electrical charge (21-41 joules) to the heart or send a series of pulses down the leads. On average the battery life of the ICD will last four to seven years before needing to be replaced.

National charities including the Arrhythmia Alliance are keen to raise awareness among families who may have lost a relative through sudden cardiac death, as in some the condition is known to run in families.

More information can be found at the Arrhythmia Alliance website http://www.aral.org.uk/index.html