Patient's thanks after flesh-eating bug reconstruction 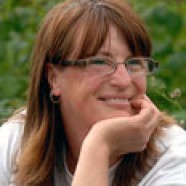 Mother-of-two Tracy Marjoram has thanked staff at the Norfolk and Norwich University Hospital for helping save her sight after she contracted a rare life-threatening eye infection.

Tracy, of Dereham, had been working on her allotment and thought she had got something in her eye. Mentioning to her mother that the corner of her eye was itching her mother suggested that she bathe her eye which she did. However 24 hours later she was in critical care having been infected by necrotising fasciitis, (sometimes called the flesh eating bug).

After undergoing an hour of surgery to remove infected tissue from around her eye, Tracy spent the next two and a half days in the Intensive Therapy Unit before spending three and a half weeks on Coltishall ward and then being discharged home with daily check-ups at the hospital to ensure that the infection had not reoccurred.

Tracy was left with her right eyelid surface missing as far as her upper cheek. The scarring resulted in unsightly fusion of upper and lower eyelid.

Six months after having the infected tissue removed Tracy started to have the first of three operations to reconstruct her face – the final operation was six months ago and today you cannot tell that Tracy had every had anything wrong, such is the success of her surgery. Tracy said: “I felt like a freak when I first came out of hospital. I had three months off work, when I went back my eye was just a slit. But Mr Beigi has done such a wonderful job with repairing all the flesh that had been eaten away.”

This was all thanks to the quick work of ophthalmic surgeon Mr Bijan Beigi, a team of anesthetists and staff on ITU, Tracy is now back to full health. The 42-year-old said: “I feel lucky to be alive. I owe Mr Beigi my life, and the staff on intensive care and Coltishall ward.”

Because Tracy's treatment was so successful it has been presented to a national conference of ophthalmic surgeons. And Bijan Beigi, the ophthalmic surgeon at the Norfolk and Norwich University Hospital who treated her, is writing a paper with colleagues for an international journal, Ophthalmic Plastic and Reconstructive Surgery, so that other surgeons around the world can learn from the experience.

Mr Beigi said: “Once the disease has spread to the neck and chest, there is a 90pc chance of dying. Going through that and coming out of it is an achievement for her.”

Mr Beigi performs 500 eyelid and face operations a year, but has only seen five similar cases in the past 10 years. He says the results of his handiwork “have come up very nicely”.

He said: “Achieving the functional part of the eyelid is the most difficult thing. It is not just how they look, they should shut well and open well. If you don't have a working eyelid you will lose your eye eventually, within five or 10 years.

“She is young and I am pleased that not only does she look normal, she has a working eyelid.”

Necrotising fasciitis is very rare but can be serious. Around 30% of those who develop necrotizing fasciitis die from the disease.

Necrotising fasciitis is caused by several kinds of bacteria. The most common cause is infection by a group A streptococcal (GAS) bacterium, most often Streptococcus pyogenes, which also causes other infections such as strep throat and impetigo. Usually the infections caused by these bacteria are mild. But in rare cases the bacteria produce poisons (toxins) that can damage the soft tissue below the skin and cause a more dangerous infection that can spread quickly along the tissue covering the muscle (fascia).

The bacteria also can travel through the blood to the lungs and other organs. The disease also may be caused by Vibrio vulnificus. Infection with this bacterium can occur if wounds are exposed to ocean water or contact raw saltwater fish or oysters. Infection also may occur through injuries from handling sea animals such as crabs.

A break in the skin allows bacteria to infect the soft tissue. In some cases, infection can also occur at the site of a muscle strain or bruise, even if there is no break in the skin. It may not be obvious where the infection started, because the bacteria may travel through the bloodstream to other parts of the body.

Group A strep bacteria producing the toxins that cause necrotising fasciitis can be passed from person to person. But a person who gets infected by the bacteria is unlikely to develop a severe infection unless he or she has an open wound, chickenpox, or an impaired immune system.