Bizarre ER returns to our screens 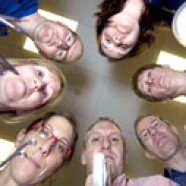 On Tuesday 21st April on BBC 3 from 10.30pm, the second series of Bizarre ER featuring the region's busiest accident and emergency department will be shown.

Freema Agyeman narrates this new ten part documentary series featuring the most extraordinary and eye-watering cases to come through the doors of a busy British A&E department, and remarkable tales of medical survival from across the UK. In tonight’s programme, a man has five inches of wadding extracted from each of his nostrils; a housewife who’s stitched up her bleeding husband using a needle and thread – and no anaesthetic; a woman whose finger is ripped off by her runaway dog; plus how surgeons saved the life of a man skewered on a fence post like a human kebab after an horrific car crash.

Bizarre ER pulls back the bedside curtain on the kinds of cases that medics talk about down the pub, but which seldom make it onto the nation’s screens. You don’t get this kind of thing on Holby…

With unfettered access to one of Britain’s busiest A&E departments, Bizarre ER features the most fascinating, extreme and unusual medical cases to hobble, stagger or skulk through the emergency room’s doors.

Bizarre ER cameras camped-out for five months at the A&E department of the Norfolk and Norwich University Hospital, waiting for the rare few cases which are truly bizarre, following them from admission through the treatment process, up to the point of discharge.

Future episodes include a butcher impaled on a meat-hook, a farmer whose knee was obliterated by a runaway sheep, a teenager who (literally) shot himself in the foot, a girl injured after being folded up inside a deckchair, a grandmother who ruptured her Achilles tendon moshing in church, and a taxi driver who broke her wrist slipping on sick left by a vomiting passenger she was dropping off at A&E…

Each episode also includes a retrospective case from elsewhere in the UK – we’ve collected the most extraordinary accidents or injuries to have occurred in recent years, and present jaw-dropping testimony from the patients and medics involved. Later in the series we meet a man who survived being hit by a million volt bolt of lightning conducted through the crucifix he was wearing round his neck; a factory worker scalped by an industrial lathe, a DIY enthusiast who sliced his stomach open with an angle-grinder and a builder almost blinded by a falling eight foot metal pole.

Bizarre ER also offers fascinating insights into the relative indestructibility of the human body, whilst lifting the lid on our all-too-frequent propensity for inadvertent idiocy.

Royal Television Society award-winning animations reconstruct the accidents themselves and illustrate the world’s most extraordinary accident-related facts and statistics.

For example, viewers will learn that the seemingly innocuous cup of tea is responsible for over 5,000 UK hospital admissions annually, that flower-pots inexplicably cause more garden accidents than electric hedge trimmers and that in America, more young women suffer catastrophic injuries from cheerleading than any other sport.