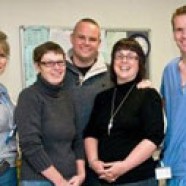 Doctors and midwives at the Norfolk and Norwich University Hospital have given their sincere thanks to a Dereham couple who have raised more than £700 money for the maternity bereavement fund.

Justyn and Tanya Greentree raised £720 for the maternity bereavement fund at the Norfolk and Norwich University Hospital following the sad loss of their baby girl Molly who was stillborn earlier this year.

Consultant obstetrician Mr Richard Smith said; “It is very kind of you to have done this for us and I can assure you that the money will make a real difference to other parents who sadly lose a baby.”

The maternity bereavement fund is used to pay for mementoes of babies such as photographs, handprints, footprints and lockets of hair. The couple raised the money from family, friends and customers of their Greentrees Adventure Store business and through a fundraising barbeque that was held in the summer.

Tanya, 34, said: “The staff were just awesome and they looked after us so well along every step of the way. They were our crutch to lean on and we just wanted to show our appreciation and put something back so that others can benefit to”.

Justyn, 35, is also planning to undertake a charity cycle ride from Land’s End to John O’Groats next autumn to raise more funds for the maternity bereavement fund at the Norfolk and Norwich University Hospital.

Midwife Jools Ross said: “Justyn and Tanya are a lovely couple and from my point of view as a midwife it was a real privilege to look after them.”