Lizzie is named Medical Secretary of the Year 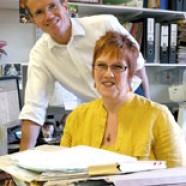 Lizzie Hammond, a medical secretary at the Norfolk and Norwich University Hospital, was “amazed” to learn that her boss, consultant obstetrician Mr Richard Smith, had nominated her for a national award.

“It came out of the blue but I was very touched by Richard’s gesture,” said Lizzie, will be presented with her trophy at an awards ceremony held in Manchester on 21 November.

Richard, a specialist in fetal medicine, said Lizzie’s organisational skills were “exceptional”, and she had introduced a number of admin changes, including a shared electronic diary, to help with the day-to-day running of the department.

“She is often dealing with pregnant women with fetal abnormality, or the recently bereaved, and many patients have commented on her sensitivity and caring attitude,” he said.

“She arrived in the department at a difficult time as my previous secretary, Sue Harper, had recently died and the atmosphere was very sad. Sue had also been a marvellous secretary and was greatly missed. However Lizzie handled things very sensitively and has made herself an indispensible member of the team.”

Lizzie, who ran her own fashion boutique in Diss before becoming a medical secretary and plans to attend the awards ceremony with her daughter, Elizabeth, insists her colleagues deserve the award as much as she does. “I am just lucky to have such a thoughtful boss who took the trouble to nominate me!”