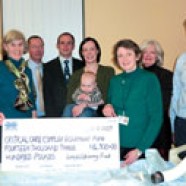 The family and friends of a young woman who collapsed during a Christmas party and later died in hospital have raised more than £14,000 to buy a patient cooling system for the critical care unit at the Norfolk and Norwich University Hospital.

During her last days in intensive care, doctors attempted to cool down her body with bags of ice to aid the recovery process. The new air flow blanket bought in her memory can be filled with cold air to the correct temperature – or alternatively warm air for patients who need to be warmed up after trauma or surgery.

“Research has shown that cooling down the body after a head injury or cardiac arrest can slow down the metabolism and help to reduce swelling in the brain – which can make a significant difference to the outcome for patients,” explained intensive care consultant Tim Leary.

“Traditional methods involve plastic bags filled with ice placed at strategic points around the body. However, this is rather undignified for the patient and distressing for the relatives as the bags tend to leak and the patient is lying in a cold, damp bed. The new blanket is much more comfortable and means the temperature can be safely controlled.

“We are tremendously touched and grateful for this gift,” he added. “It’s a huge amount of money to raise in just a year.”

Lucie had been married for only 18 months to farmer Rob Proctor and worked for Visit Norwich before becoming membership services manager for Anglia Farmers.

Her mother, Annette Alston, whose husband Ian is a farmer in Colton, commented: “Lucie was full of energy and as fit as a fiddle so her death was entirely unexpected. We decided to do something to help the intensive care unit as we felt this was a way to make something positive out of a tragedy. We knew that Lucie would want us to take action to help others in a similar situation.”

A collection was taken at Lucie’s memorial service and generous donations have been given. Fundraising events have been organised, ranging from a sponsored “waxathon” to a Calendar Girls-style calendar starring Norfolk Young Farmers – Lucie was a past chairman of Dereham Young Farmers and her husband Rob was Norfolk YFC county chairman for 2007/8.

Other local events were organised by members of Norfolk Fund Raisers who are family friends of the Alstons, and donations were also made in memory of a close family friend, Phillip Gill, who died suddenly in January 2009.

More events are planned for the future, including a YF fancy dress ball and a “lavish lottery” at the Visit Norwich Sparkle Ball to raise funds for more life saving training and equipment such as defibrillators for people who suffer sudden heart failure

“These little machines can mean the difference between life and death – in some States in America they are compulsory in venues where there is a large footfall,” said Annette. “Each defibrillator costs £1,000 and we are aim to encourage as many of the major venues in Norfolk as we can to make them available. We also want to sponsor CPR and first aid training for Young Farmers and Countrysiders. We would like to take this chance to thank everyone who is supporting Lucie’s Project.”

Enquiries about, or donations to, Lucie’s Lifesaving Project can be made via Annette Alston on 01603 880285 annette@honingham.co.uk

Enquiries about the Young Farmers calendar can be made via Ches Broom cbroom@easton-college.ac.uk