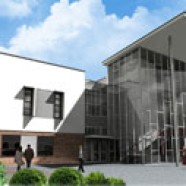 A public exhibition of the designs for a new £15 million Cromer and District Hospital will go on show at the north Norfolk hospital for a week from Monday January 25.

The exhibition is being held in Cromer to allow people to comment on the plans for a new £15 million hospital in the north Norfolk town. The designs can also be viewed on this website www.nnuh.nhs.uk/page/newcromer

The week-long exhibition takes place from Monday January 25 through to Friday January 29 (from 9am to 5pm) in Out-patient Area 1 at Cromer and District Hospital, Mill Road, Cromer.

The new facilities will include an ophthalmic operating theatre plus new diagnostic services including a permanent on-site mammography (breast screening) service, and a DEXA scanner for osteoporosis diagnosis, a brand new MRI scanner is also planned. The new hospital will see around 11,000 more patients a year than are currently seen at Cromer.

The old Davison and Barclay ward areas of the current hospital will be retained and refurbished for use as a permanent renal dialysis unit with room for expansion. A bid to East of England specialist commissioners to extend the renal dialysis unit, doubling the number of stations,  will be submitted early in 2010. The plans for the new hospital also include space for community groups to meet. The plans for the site also allow room for further expansion if required and affordable in the future.

Chairman David Prior said: “We are determined to deliver this long-awaited new hospital for people in north Norfolk as soon as we can. I would urge people to come and look at the new plans and give their views. This new hospital will be at the heart of the community for many years to come and I am pleased that we have an exciting sets of plans to submit to the council for planning approval.

“I know that some people will be disappointed that we won't be able to provide all the facilities that they would like to have at Cromer however we will be introducing new and expanded services that will be a available to a great many more patients than before and I am convinced that on this basis the new hospital will be both clinically and financially sustainable for the future.”

The planning application will shortly be submitted to North Norfolk District Council with construction work due to start in the autumn this year, and with completion in autumn 2012. The project is being funded by the generous Sagle Bernstein and Phyllis Cox legacies.