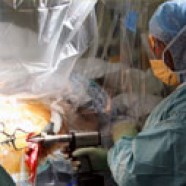 Research undertaken at the Norfolk and Norwich University Hospital suggests that traditional nylon sutures may be preferable to metal staples when it comes to closing wounds after hip and knee surgery.

Surgeons currently use both methods but trials involving 683 orthopaedic patients showed that the risk of developing a superficial wound infection was up to four times greater when staples were used.

“Staples are regarded as quicker and easier to use than sutures, but some have suggested that they are more likely to cause infection and may also be more expensive,” says physiotherapist Toby Smith, who led the research with orthopaedic surgeons Professor Simon Donell and Mr Charles Mann, and physiotherapist Debbie Bowyer.

“We analysed the findings of research studies evaluating 683 patients, of whom 351 had wounds closed up with staples and 322 with traditional nylon sutures. While the risk of superficial infection was greater, there was no significant difference between sutures and staples in the development of inflammation, discharge, re-opening of a previously closed wound, necrosis or allergic reaction.”

“We are suggesting that further high-quality research is needed to confirm our findings, but in the mean time we would urge patients and doctors to think more carefully about the use of staples for wound closure after hip and knee surgery.”

The results at NNUH, which are published today (Wednesday 17 March) by the British Medical Journal, fit with evidence from other specialties where studies have shown that the time saved by using staples is rarely more than two or three minutes and that this time benefit is lost when the staples have to be removed compared to using absorbable stitches. Time may also be lost in treating an increased number of infections.