Round Britain with a brain tumour 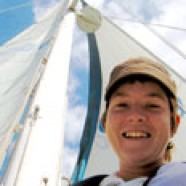 A junior doctor at the Norfolk and Norwich University Hospital who is battling cancer is about to sail around Britain in a bid to raise funds for Brain Tumour Research and the Big C Centre.

Josie Phillips, 27, from Norwich, has had three operations to remove a brain tumour after suffering a seizure while on holiday in Spain six years ago. She has made a remarkable recovery, even though the tumour is malignant, and is now determined to do all she can to raise awareness of this little known disease.

“Most people who suffer a brain tumour are not in a position to speak out about it,” she says. “In the UK more children and people under the age of 40 die of a brain tumour than any other cancer – yet brain tumour research is woefully under-funded.

“Sailing Round Britain is a great personal challenge for me and I will never be far from medical help should I need it. We are hoping to raise at least £20,000 for research and £5,000 for the Big C Centre.”

Together with her husband, Roger, who is doing a PhD in coastal research at the UEA, Josie will set off from Fox’s marina in Ipswich on 15 May and hopes to return by the end of August, stopping off at several points along the way to meet friends and drum up support. She will return to NNUH in September to continue her training.

“I can’t fault the care and effort of the clinical teams both here at NNUH and at St George's hospital in London, where I had my operations, and the Big C Centre has been really amazing – they gave me cups of tea and listened to me when I was feeling down.”

“It has been a tough goal to carry on with my studies in between operations but I am the sort of person who thrives on a challenge. My colleagues have been tremendously supportive in allowing me to work flexible hours and take unpaid leave. However, I am very determined to continue my work as a doctor and I would like to specialise in anaesthetics.”

To follow Josie’s progress or contribute to her fundraising, go to www.contessa32.co.uk