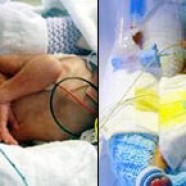 On Sunday the 23 October 2011 Peter Durham and Sean Aldred will be cycling a total of 100 miles along with Sean’s brother-in- law, Jonathan around Norfolk.

Starting at 7am they will ride from NNUH taking in Sheringham, Cromer, and Sea Palling before turning back towards Norwich via Wroxham and Coltishall, and returning to the hospital hopefully in under 9 hours.

Peter Durham and Sean Aldred met on the Neonatal Intensive Care Unit (NICU) at the Norfolk and Norwich University Hospital (NNUH) when their babies were there back in February 2010 and became good friends. When they heard of the Norwich Cots for Appeal they decided they wanted to do something as a way to say thank you to the unit.

Peter's daughter, Lily, was born 12 weeks early in February 2010, weighing just 2lb 4 oz. As a premature baby, she was taken immediately to (NICU) at the NNUH where she spent 9 weeks before she was well enough to go home.

Peter said, ‘We feel really lucky to have had the amazing NICU staff on our side and wanted to say a big thank you to them by raising some money to help them achieve their target of raising £500,000 to purchase four more cots for babies who need intensive therapy or high dependency care’.

Amanda Williamson, NICU Nurse Manager said “We’re very grateful to Peter and Sean for getting behind our appeal and organising this fundraiser. Every donation, no matter its size, will make a real difference to us and the babies we look after.”

If you would like to make a donation their justgiving page is: http://www.justgiving.com/sean-aldred