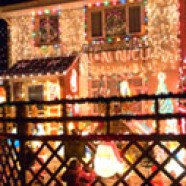 Christmas is looking a bit brighter for NICU (the Neonatal Unit at The Norfolk and Norwich University Hospital) thanks to a Norwich family's bid to light up their home for the Norwich Cots for Tots appeal.

Around 9,000 bulbs went into the display in Shepherds Close, Norwich, which was designed around the name NICU and built by security guard James Murphy for his 18-month-old daughter, Summer Rose.

James's partner Rachel Davis, who lives in Rogers Close, Norwich, explained: “Two of my friends had babies who owe their lives to NICU – one weighed less than 2lb at birth and would never have survived without the care she received from the Unit. We wanted to do something for all the other children who may need their help.”

James, who lives at the house with his mum Brigitte and dad Stephen Murphy, an electrician, admits he has a fascination for lights and the collection has been growing since he started planning the display in September.

“We are a bit hidden away in a cul de sac but we hope people will take the opportunity before Xmas to come and see the house and leave a donation for NICU,” he said.