End of an era for hospital twins 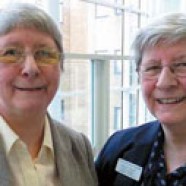 This Friday (6 January) marks the end of an era for twins Marion Baxter and Margaret Askew when they retire from the Norfolk and Norwich University Hospital after 63 years’ service between them.

Marion was the first to join the hospital’s admin staff in 1966. Her sister followed in 1992 and for the past 20 years they have pursued parallel careers – Marion is now the office manager in Medical Illustration and Margaret is a PA/directorate secretary in Oncology and Haematology.

Both married with families, they live 10 miles apart, Marion in Old Catton and Margaret in Hethersett, and take the opportunity to meet for lunch most days, often choosing the same food. Both are active churchgoers – Marion is a preacher on the Norwich Methodist circuit – and both sing in local choirs.

“As children we dressed alike and were encouraged to do everything together,” says Marion. “Our father even suggested we train together as secretaries because we’d never be out of work – it turns out he was right about that!”

While Margaret took the lead academically at school, the twins have each developed their hospital roles and in 2009 Marion was awarded a Fellowship by The Institute of Administrative Management after years of studying in her spare time. In the London audience was an extremely proud Margaret: “There is no sibling rivalry between us – we really are each other’s best friends,” she said.

Naturally the twins chose the same day to retire but the family association with the hospital will continue – Marion’s daughter Andrea works in Medical Illustration as an administrative assistant and Marion herself is planning to return as a hospital volunteer. With two children and five grandchildren, Margaret expects to be too busy for volunteering, but who knows? We may spot the lookalikes lunching together again before too long.