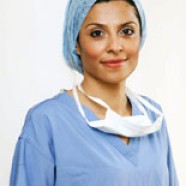 Norfolk and Norwich University Hospital plastic surgeon Dr Rozina Ali, will be be featuring in a Horizon Science documentary called “The Truth about Looking Young” which will be aired on BBC2 at 9.00pm on Monday 23rd July.

In this documentary Miss Ali leaves the operating theatre behind for the frontiers of skin science. As a consultant plastic surgeon Miss Ali is sceptical about some of the claims made about advances in skin science. So for her, all that matters are the hard scientific facts and evidence.

She explores three major causes of skin ageing. The first is hidden away in the unseen power of the sun’s rays.

In making of this documentary Rozina meets a couple of long distance lorry drivers who’ve been collectively on the road for more than 50 years. Believe it or not, lorry drivers are at the cutting edge of the science of how the sun damages our skin.

But what’s shocking is that this kind of damage isn’t just confined to lorry drivers. Rozina has her face photographed by the Visia reveal camera and discovers that she too has far more wrinkles on one side of her face than the other! A consequence of everyday driving.

The solution is to make sure you’re wearing sunscreen, with a five star UVA rating, both inside and outside. But sunscreen isn’t foolproof. It rubs off and takes its protection with it. Solving that problem means diving into the sea. In a radical new piece of science Rozina discovers that the future of sun protection may lie in a squid’s eye.

The second big enemy of skin ageing is oxygen – the very air we breathe. Rozina meets a team of scientist from who have drawn up a special diet to fight oxidative stress and free radical damage, critical factors in ageing our skin.

The third danger to our looks lies in sugar – the simple sugars in our blood and the complex sugars known as glycans, discovered in our skin. As we get older we start to lose our vital glycans and that has important consequences for our skin. It is this new, fundamental science, of glycobiology, that Rozina finds so exciting! It may be that we can never avoid wrinkles altogether, but glycobiology holds out the promise that we might just be able to delay them that bit longer.

Miss Ali said “I found the experience a real eye-opener. Science is objective and indisputable, whatever purposes it is used for – academia, commerce or therapy. I was impressed by the quality of the work being carried out and the diligence and enthusiasm of the researchers I met.

I was quite amazed at just how hard one has to work, not just to research good science but to make it fun and easily understandable to the public. It takes an awful lot of effort to make things look effortless and attractive! That’s as true of TV as it is of surgery”.