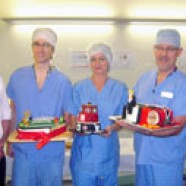 Theatre staff at the Norfolk and Norwich University Hospital have raised over £200 for charity after a James Bond themed Bake Off.

A bake off and cake sale were held to raise money for Walking with the Wounded and BLESMA, British Limbless Ex Servicemen's Association, the national charity for limbless serving and ex-service men and women and their families.

Cakes were on sale in the theatre staff rest room on Friday 23rd November and a competition was held for the best Bond theme cake, with the top three being judged by Julie Cave, Director of Resources and Matt Fleming, Non-Executive Director and the great nephew of the James Bond author, Ian Fleming.

Fiona Durban, Divisional Operational Manager for Theatres, said: “We are delighted to have raised money for an important charity and enabled our colleagues to show off their creative skills.”