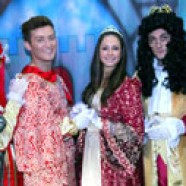 Christmas can be a particularly gloomy time for poorly children undergoing treatment in hospital but a visit from Starlight’s unique Christmas pantomime to the Norfolk and Norwich University Hospital (NNUH) brought a dose of festive fun and laughter to the young patients there.

Starlight Children’s Foundation is a national charity that provides entertainment in hospitals and hospices and grants wishes for seriously and terminally ill children. The pantomime has been staged exclusively for Starlight by the interactive theatre group The Panto Company and the NNUH was visited as part of an eight week tour of the country’s hospitals and hospices.

On Monday 30th December, Starlight’s Sleeping Beauty was staged in the Jenny Lind Children’s Outpatient department. The panto’s four actors dance, dazzled and sang for the young patients, their families and the staff. Every year, Starlight provides entertainment and distraction to over half a million poorly children and Starlight’s Christmas panto gives thousands of poorly children the chance to shout “He’s behind you!” from the safety of the hospital ward.

Judy Holland, Play Specialist at NNUH said, “Every year we look forward to the arrival of Starlight’s Christmas Panto. It’s always a really engaging show and it’s a wonderful escape for our young patients. Play is proven to significantly improve a poorly child’s hospital experience and Starlight’s Christmas Panto is a fantastic distraction from any pain they might be feeling as a result of their illness.”

Heather Foster, who plays Aurora and The Queen in Sleeping Beauty, said, “Starlight’s Christmas Panto is designed to be really engaging and entertaining for the children and we hope that the performance at NNUH gave the patients there a good dose of fun! From their beaming smiles, it certainly looked as though they were enjoying the show!”

The pantomime is just one way that Starlight brings fun, laughter and distraction to poorly children across the UK. The charity also grants once-in-a-lifetime wishes to children with serious and terminal illnesses. A Starlight wish gives a seriously ill child and their family a positive focus during the long hours of treatment and happy memories to treasure, whatever the future may hold.