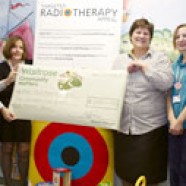 Customers and staff at Waitrose in Norwich have raised £575 for the Norfolk and Norwich University Hospitals NHS Foundation Trust (NNUH) charity.

Shoppers at the Eaton branch of Waitrose voted to support two areas of the hospital in October 2013, by placing tokens into the store’s Community Matters box. Buxton children’s ward and the Targeted Radiotherapy Appeal (TRA) have both received donations.

£290 has funded new toys for children to play with during their stay in hospital and £285 was donated to the hospital’s TRA campaign. This aims to raise £600,000 to provide state-of-the-art facilities for people undergoing internal radiotherapy, known as brachytherapy, which is used to treat prostate and other cancers. Brachytherapy will help to reduce treatment times for some patients and mean they can be treated closer to home.

Louise Cook, Fundraising Manager at NNUH, said: “We are very grateful to Waitrose and their customers for supporting these two departments. Their Community Matters token system is a great example of how local businesses and the community can support a local charity benefiting patients in Norfolk. We are always keen to hear from organisations and individuals who would like to support our charity which benefitS so many different parts of the hospital.”

Melanie Spillman from Waitrose said: “We were delighted to support our local hospital through our Community Matters scheme. Our customers like supporting local causes and showed this through the amounts raised for both departments.”

Caption for photograph
From left to right: Melanie Spillman from Waitrose, Jenny Tomes, Head of Radiotherapy at NNUH, Sally West-Lindell from Waitrose and Katie Collins from Jenny Lind Children's Department.

Notes to editors
Anyone interested in supporting the hospital charity can contact Louise Cook, Fundraising Manager at NNUH by telephoning 01603 287107 or e-mailing fundraising@nnuh.nhs.uk