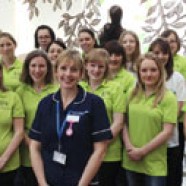 A group of 25 volunteers have been recruited to help provide breastfeeding support to new mums at the Norfolk and Norwich University Hospital (NNUH).

The new “Breastfeeding Peer Supporters” will be on hand to offer support for new mothers who are breastfeeding. They will be there to listen to any of the women’s experiences and concerns, describe effective positioning and attachment for breastfeeding and demonstrate the technique of hand expressing milk.

The volunteers have all undertaken training by the Breastfeeding Network (BfN) Charity or the National Childbirth Trust (NCT) which has been funded by Norfolk County Council Public Health. They have all completed a nationally recognised qualification with the Open College Network, taken a two day Breastfeeding Management course to UNICEF standards and have completed the hospital's induction training. In addition to this they have all had one to one assessments on their skills before volunteering on the maternity ward. The volunteers complement and enhance the care given by the maternity staff at the NNUH and act as a “well informed friend” or mentor to new mothers.

The new group of volunteers join ten other women who started volunteering as breastfeeding helpers at NNUH in February last year. In 2013 these ten helpers gave support to 99 women and volunteered for a total of 87 hours. The impact of the expanded service will be measured by breastfeeding rates and feedback from mothers and staff.

Luisa Lyons, Infant Feeding Co-ordinator at the NNUH, said: “Historically women have supported each other during pregnancy, childbirth and being a mum. We now have a large group of volunteers who will help even more women to breastfeed successfully and more importantly, continue to enjoy successful breastfeeding once they leave hospital.”

Glynis Moore, Head of Midwifery at NNUH, said: “Our maternity staff are committed to supporting breastfeeding and were are thrilled that these new volunteers are working alongside them to further assist mothers in our care.”