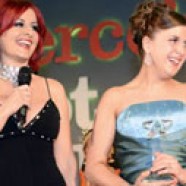 When Mile Cross resident Emma Nuule entered a talent contest sponsored by her company, Serco, she never dreamed she would win the top prize in an international competition.

The domestic assistant at Norfolk and Norwich University Hospitals NHS Foundation Trust battled 13 other finalists from all over world to take first place with her rendition of Puccini’s ‘O mio babbino caro’.

While in London for the finale, having already beaten hundreds of other contestants in the first round worldwide, Emma was coached by Carrie and David Grant. They have worked with music legends such as Michael Jackson, the Spice Girls, Gwyneth Paltrow and many others.

“They are probably the best known vocal coaches in the UK,” Emma said. “They just took me under their wing. They coached me to help me connect with the song more and it obviously paid off.”

After taking top spot overall, she won a large trophy and £2,500 cash, on top of £2,500 she had already won for winning the UK and Europe heat of the competition.

Despite her clear talent, Emma entered the contest with some apprehension: “There were dancers and singers — of all different styles – from the Americas, Middle East, India, Australia and the Pacific Rim, as well as from the UK and Europe. The talent in the competition was unbelievable.”

Emma has been singing for 16 years and studied with Margaret Norden while she was growing up. Although she does not sing professionally, she has starred in ‘Fiddler on the Roof’ and has received lots of requests to sing at parties since people have found out about her international success.

How does she feel about winning? “Great, the best experience of my life. I enjoyed the whole thing, it’s given me more confidence and opened more doors, meeting very famous singing teachers who may want to teach me.”