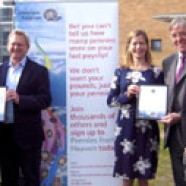 Two awards have been made to the Norfolk and Norwich University Hospitals NHS Foundation Trust (NNUH) in recognition of the donations made by staff to charity via Pennies from Heaven.

The scheme involves hospital staff donating the spare pennies from their monthly payslip, ranging from 1p to 99p, which goes towards a different charity each year nominated by the staff.

John Hough, Chairman of Pennies from Heaven, said: “NNUH should rightly be recognised for the great participation level achieved and, as importantly, for the effort that has been made by many at the Trust in profiling the scheme over a number of years.”

John Fry, Chairman of NNUH, said: “We are delighted to receive these awards. The Pennies from Heaven scheme has made a great contribution to many good causes and provided a boost for many of our own charities.”

NNUH has been supporting Pennies from Heaven since 2007 and was the first NHS Trust to operate the scheme. Staff have raised in excess of £21,000 for a range of charities, including Cots for Tots, EACH, Keeping Abreast and more recently NNUH’s Targeted Radiotherapy Appeal.