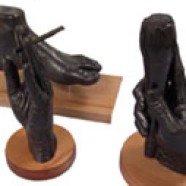 Four, well known celebrities have all had their foot or hand immortalised for Norfolk and Norwich University Hospitals Foundation Trust’s Targeted Radiotherapy Appeal (TRA). Much loved local radio broadcaster Stephen Bumpfrey, Norwich footballing legends Iwan Roberts and Darren Eadie along with the nation’s favourite actress and comedian Joanna Lumley have had their feet and hands made into a plaster-cast sculpture, all in aid of the local charity.

The money raised through the TRA will be used to provide state-of-the-art facilities for people undergoing internal radiotherapy, known as high dose rate (HDR) brachytherapy. The new facilities will allow more patients to benefit from reduced treatment times and also means some patients can be treated closer to home. The appeal is very close to reaching its target of £600,000 and the hospital charity is urging everyone to get behind the final push.

Louise Cook, fundraising manager said, ‘It was amazing that these four well known celebrities would be willing to help us raise money for the appeal. The hospital charity is a very local cause which can make a difference to people in Norfolk. We hope people will bid high in order to secure one of these totally unique and one off pieces of art.’

The auction will run from 3rd to 16th November and items can be bid on at the following links;