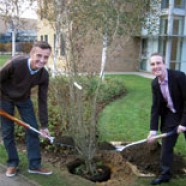 A tree has been planted at the Norfolk and Norwich University Hospital (NNUH) in memory of William Bradley who fundraised more than £152,000 for the Cystic Fibrosis Trust and local patients.

William collected donations at various supermarkets and garden centres around Norwich for the Cystic Fibrosis Trust which also benefited local patients treated at NNUH. NNUH used the funding to purchase equipment for the respiratory department such as new nebulisers for patients.

William began fundraising in the 1990s after his granddaughter Natalie was diagnosed with Cystic Fibrosis, one of the UK’s most common life-threatening inherited diseases. The disease affects vital organs by clogging them with mucus that makes it hard to breathe and digest food. William passed away in February 2012 after being diagnosed with motor neurone disease. On Wednesday 19th November 2014 a tree was planted in the hospital grounds in memory of William and to honour his fundraising efforts.

Carl Bradley, William’s grandson, said: “My granddad was well known by many local people for his huge fundraising efforts, and fun extrovert personality. He was nominated for an MBE twice, was crowned Volunteer of the Year locally and was a regional finalist in the ITV Pride of Britain Awards. We are so proud of everything he achieved and how he helped so many people; it’s lovely we now have the tree and plaque at the hospital where his efforts can be remembered.”

Christine Berwick, Secretary of the Norfolk Branch of the Cystic Fibrosis Trust, said: “This tree is a wonderful tribute to the memory of William Bradley who generously devoted so much of his time and energy to the work of the Cystic Fibrosis Trust and to whom we are all so grateful. As well as specifically helping patients at the NNUH he made a huge contribution to research thus benefitting CF sufferers throughout the UK.”

Louise Cook, Fundraising Manager at NNUH, said: “William was such an inspirational character and we are delighted that this tree will honour his amazing efforts which benefitted many of our patients.”