Morgan makes no bones about it 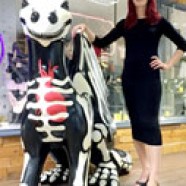 Watch out! There will soon be a friendly dragon about in the shape of Morgan who will be smiling at people and making them think about other people as they go round the GoGo Dragons! trail in the city of Norwich in the summer of 2015.

The friendly dragon is supporting Norfolk and Norwich University Hospital. He is called Morgan because his mission is to encourage people to think about organ donation and discuss the subject with their family and friends, making their views and wishes known.
The dragons follow on from the very successful GoGoGorillas! trail in 2013.

Marie Garside, the specialist nurse in organ donation, said “There are currently more than 9000 people in the UK waiting and hoping for an organ transplant that will save or transform their lives. For many of them transplantation is the only hope of survival. Tragically 3 of these people die every day because the organ that they need does not become available. These deaths could be avoided if more people gave consent for organs to be donated after death.

At the NNUH we give every family the choice to donate when medical circumstances allow. More than 100 of our patients have been donors over the last 10 years, saving and changing the lives of hundreds of people and their families.”

Morgan is a large black, friendly, dragon with a big toothy smile and all his bones painted on as well as a big, kind, red heart.

He will be part of the new trail launching in June next year organised by Break, a charity caring for vulnerable people. As well as the main dragon sculptures there will also be community and school projects to engage with as many people as possible.

The hospital already has an elephant and a gorilla that were donated after being bought at auction and a second gorilla which is on loan. All three were part of the previous trails.