Carrying his child in his arms a father in Pakistan walked miles in the heat to see if Mr Junaid Hanif, a consultant from the Norfolk and Norwich University Hospital, could help his daughter who had two diseased ears.
It was Mr Hanif’s first charitable visit to carry out ear surgery in a poor part of Pakistan six years ago. He went on to perform surgery on one of the little girl’s ears and make a huge difference to her life.  “It was moving to see her father’s gratitude, he did not believe such surgery was possible. The following year I was back in Pakistan operating on her other ear.”

Mr Hanif, an Ear, Nose and Throat Surgeon with a subspecialist interest in ear diseases, is now about to visit that country for the seventh time with a team of ear surgeons and several pieces of equipment, including old hearing aids, to donate to a charitable hospital.

The team will see many poor patients of all ages with ear conditions, particularly a disease called cholesteatoma of the ear, which causes severe infections leading to hearing loss and sometimes life-threatening complications such as meningitis and brain abscess.

“It follows on from a middle ear infection of dead skin growing inwards. Without surgical treatment it can lead to loss of hearing, paralysis of the face and other severe intracranial complications. We remove the disease and that often improves the hearing,” he explained.

Mr Hanif formed a group with three other ear surgeons several years ago and forged a link with a charitable hospital in a poor area of Karachi. The hospital is financed mostly by industrialists’ philanthropy in Pakistan but it also relies on equipment donations from other countries.  “In the past I have taken two operating microscopes donated by the Norfolk and Norwich University Hospital which were being replaced by new microscopes here. Without these microscopes the ear surgery would not be possible”, Mr Hanif explained

“A local ENT doctor sees hundreds of patients prior to our arrival and selects between 50 and a hundred suitable patients to be assessed by the UK team and we then choose appropriate patients for surgery in the coming days.
“Over three days last year we did 32 ear operations. There were two theatres running concurrently from 9am to 9pm operating on all ages. Eleven patients had major ear procedures where we drill out the mastoid bone of the skull to eradicate all of the ear disease.
“In this country I would do around 35 to 40 of those operations a year. It’s quite a specialist operation.”

Mr Hanif explained that to have the work done privately in Karachi would be about £600 plus the follow up. The average wage is just £150 – £200 a year.

On that first visit they also took out £60,000 worth of equipment including operating microscopes and a drill set. It is not as good as the equipment he normally uses as it is second hand, but it helps to make a difference.

As well as carrying out the operations they have been training a local doctor to use these instruments in order to help patients throughout the year.

“We train the dedicated local doctor to do the surgery and now we are 6 years down the line he is now able to perform medium and some difficult operations, and do them regularly. There are also follow up consultations to check on how these patients are doing after surgery and there have been excellent outcomes.

A local Audiologist joins Mr Hanif’s team to carry out hearing tests on patients and over 100 hearing aids that were returned to the Audiology department at NNUH, have been donated for him to fit patients in Karachi. “A simple thing like a hearing aid makes a massive difference to someone’s everyday life.”

“Despite the security concerns it’s a week I look forward to as soon as I return. Professionally speaking it’s an extremely rewarding week of my year. Mr Hanif said “Its’ also helping me here at the NNUH in improving my skills by dealing with the disease process that is much more advanced. Here I see about one such advanced case every 2 or 3 years, but over there I deal with the difficult cases daily.”

He will be leaving Norwich with bags full of equipment on November 27th and this year the plan is to take more equipment and treat more people than previous years.
Although it will be long hours in an operating theatre he also takes a break to distribute chocolates from the UK in the children’s ward, which he says they treat like gold bars. “The smiles on their faces are brilliant.” 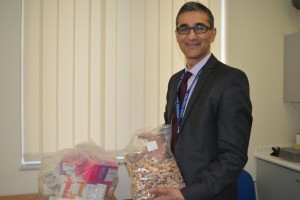