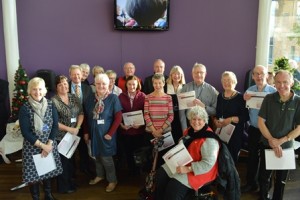 Twenty seven volunteers at the Norfolk and Norwich University Hospital (NNUH) have just received awards in recognition of their long service, a combined total of more than 170 years !

The awards were presented by NNUH Chairman John Fry and Chief Executive Mark Davies at the Volunteers’ Christmas Party held at the hospital.

Mark Davies, Chief Executive of the Norfolk and Norwich University Hospitals NHS Foundation Trust, says: “We are very pleased to be able to recognise our volunteers and their dedication to our hospitals. Their support enriches the lives of patients and staff across both hospitals and we are very grateful to them.”

There are 674 volunteers at NNUH who fulfil a variety of roles, such as meeting and greeting patients as they arrive at hospital, supporting patients and staff in the wards and clinics, and providing support to patients at mealtimes. Dementia support volunteers have been introduced to the Older People’s Medicine wards and some specialist roles have also been established such as Reading Aloud, Reminiscence, Breast Feeding Support and Music Therapy.