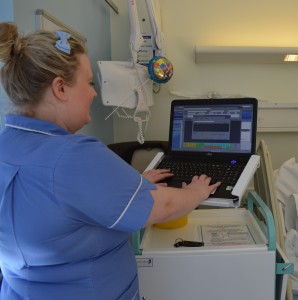 A new electronic prescribing system has now been rolled out to all the medical wards at the Norfolk and Norwich University Hospital, making huge paper charts a thing of the past and allowing medical staff to access charts from anywhere in the hospital.
The biggest change in an electronic system affecting patient care at the hospital means doctors, nurses, pharmacists, physios and occupational therapists will all be able to access a patient’s drug chart without having to see a physical copy.
Specialist Pharmacist James Hipperson who has been working on The Electronic Prescribing and Medication Administration system (EPMA) project said “A lot of people need to look at drug charts  and now they are electronic it will save a lot of time as they can be accessed from offices and other parts of the hospital. This is particularly useful for the pharmacy as the chart used to be taken to them.”
The charts are now available on special laptop trolleys which nurses take around the ward and administer the correct medicine at the patient’s bedside. It also prevents any mistakes being made as the chart has to be filled in properly, and there is no chance of misreading someone’s writing.
Drugs can also be ordered electronically and remotely from the chart and the order will then appear in the pharmacy.
Helen Wilimott, EPMA project manager, explained that drugs charts were about 28 pages long, under the new system some patients still had a chart that was just four pages and that is expected to vanish following an adjustment next year.
The NNUH and James Paget University Hospital were successful in a bid for £1.743m of funding from the Safer Hospitals, Safer Wards technology Fund sponsored by the Department of Health to implement the system.
Brundall, Elsing, Holt and Knapton wards were the first to go live with the new system then it was rolled out across the rest of the 19 medical wards. The eight surgical wards are due to get the system early next year.
Deputy Sister Joanne Ward on Brundall ward has been using the system for several months. “It’s, quicker, simpler, more efficient and straightforward. The new system makes sure patients don’t miss a dose and it’s very secure”
Current developments include automatically printing discharge letters to GPs that will include the prescribed medicine a patient needs when they leave hospital.