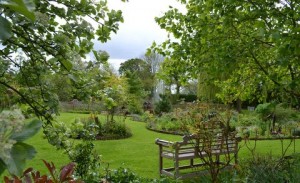 A patient who was treated for cancer at the Norfolk and Norwich University Hospital is saying thank you for his treatment by raising money for the hospital charity by opening his garden to the public. Furze House at Harleston Road, Rushall, IP21 4RT, which is owned by Philip and Christine Greenacre, will be open on Saturday 4th to Monday 6th June (10am – 5pm) and Saturday 20th to Monday 22nd August (10am – 5pm).

The garden was first opened to the public in 2010 and the family raised money for charity each year until 2015 when Philip Greenacre was diagnosed with prostate cancer. Philip explained what happened, “I had no symptoms, so going to the doctors was not a priority. I felt fine, but gradually I was worn down by the determined nagging of my two daughters. The first PSA test came back slightly higher than normal so a retest was booked for 3 months. The second test showed an increase so I was referred to a Urology consultant for a biopsy. The results from the biopsy stated 50% of the samples were cancerous.

“This was when the NHS, and especially the wonderful staff at the Norfolk and Norwich University Hospital, really got going. The first step was a course of hormone tablets followed by hormone injections. I then became a member of the “37” club as I endured 37 days of radiotherapy. It was hard there is no getting away from that, but my treatment by the staff at the NNUH was nothing short of exceptional. Everyone always had a smile and was always positive.”

Philip and Christine decided to give ‘something back’ to the NNUH by opening their garden again this year, raising funds for the hospital charity, specifically for cancer. To raise money there will be two open weekends this year, plus all the ‘by appointment’ group visits.

Louise Cook, Fundraising Manager said, ‘ We are delighted that this year Christine and Philip are supporting their local hospital charity, with monies raised going to benefit other cancer patients at the hospital.’

Philip and Christine Greenacre retired from farming in 2008 and bought Furze House in Rushall with its two acres of land as their gardening project. When the Greenacres moved in the garden was no more than lawn, trees and 4 herbaceous beds. The garden has evolved over the last eight years and now boasts over 50 beds full of shrubs, perennials and rare plants sourced from around the United Kingdom and Europe. Furze House Garden entered the National Garden Scheme (NGS) yellow book in 2010 and received their five year certificate in 2015.