Two senior Trust Board roles have been reappointed for a three year term at the Norfolk and Norwich University Hospitals NHS Foundation Trust (NNUH).

John Fry, who joined the Trust in 2013, said: “I am very proud of our hospitals and the service we deliver to patients and it gives me great pleasure to continue in my role as Chairman.”

Mr Fry was chief executive of regional media group Johnston Press from 2009 to 2012, and before that from 2002 was chief executive of Archant, a media company which publishes newspapers and magazines across the UK including the Eastern Daily Press and Norwich Evening News. A graduate of Cambridge University, John was Chairman of Shaping Norfolk’s Future from 2007 to 2009 and is currently Chairman of the Forum Trust.  John has lived in Norwich with his family since 2002.

Mr How, who also joined the Trust in 2013, is Chairman of Roys (Wroxham) Ltd, and Non executive director of Dixons Carphone plc and Henderson Group plc.  Tim was chief executive of Majestic Wine Plc from 1989 to 2008.  At NNUH Tim is Senior Independent Director and also chairman of the Finance and Investment Committee.

Mr How said: “I am very pleased to have been reappointed to the Trust as a Non-Executive Director and look forward to continuing to contribute to the Board of the Norfolk and Norwich University Hospitals NHS Foundation Trust”.

Mark Davies, Chief Executive of NNUH said: “I am delighted that both John and Tim will remain with us on the Trust Board. They both contribute enormously with their extensive knowledge of leadership and business experience and their passion and drive to provide the best care possible for patients.”

As an NHS Foundation Trust, NNUH also has a Council of Governors with representatives elected by staff and patients as well as a number of appointed governors from partner agencies such as the University of East Anglia, Norfolk County Council and Clinical Commissioning Groups. It represents the public, monitors how services are developed and how the organisation is managed and has responsibility for appointing the Chairman and Non-Executive Directors. 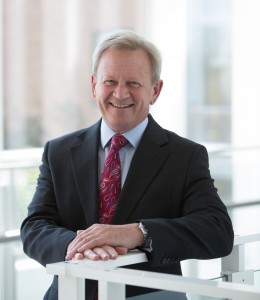