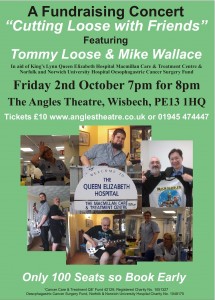 An NNUH patient is holding a concert to support the department which saved his life. The concert, organised by patient Mike Wallace in collaboration with a local professional musician Tommy Loose, will be held at the Benjamin Gooch Theatre at the Norfolk and Norwich Hospital, Saturday 13 August 2016 starting at 7.00pm.

Mike Wallace decided to support the Oesphagogastic Cancer Surgery Fund, part of the hospital charity, to say thank you for the care and treatment he received. The concert will be a musical journey of songs which either have been written by Mike, or which have inspired him as he went through cancer treatment.

Mike said: “Having experienced the excellent care from the Mr Ed Cheong’s team I really wanted to help others in a positive way and the concert will benefit a cause very close to my heart.”

Mr Edward Cheong, Consultant Oesophagogastric and Laparoscopic  Surgeon, and Upper GI Cancer Lead at NNUH, who treated Mike said: “We are incredibly grateful to Mike and Tommy for putting together this second concert here at the NNUH. It will be a fantastic evening. This concert will not only raise funds but also awareness of oesophageal cancer.  It is important for the public to be aware that if they have heartburn on and off for three weeks or more, they should see their doctor. ”

Louise Cook, NNUH Fundraising Manager said: “Mike has written many of the songs himself so the concert will  be very personal for him and his family. At the same time it will be a very enjoyable evening to attend.”

At the Concert, both Mike’s and Tommy’s CDs and T shirts will be available with all profits going to the fund. Monies raised from the concert and Mike’s CD, will be split between the hospital charity and one other.

The concert will be at Benjamin Gooch Theatre on Saturday 13 August starting at 7.00pm, tickets cost £5.00 and free parking. Tickets for Cutting Loose 2 are available from www.cuttingloose.org.uk