Medal awarded to NNUH doctor for contribution to anaesthesia

A Norfolk and Norwich University Hospital anaesthetist has been awarded a lifetime achievement medal to honour his contribution to the medical specialty.

In 1999, Nick was part of a team at NNUH which set up an awake intubation course for anaesthetists, where this skill could be taught and honed by practising the technique on other course members. This was the first course of its kind and these methods and principles quickly spread, as the Norwich team designed an instructor course to facilitate others in providing this training. Courses of this type are now offered across the country and abroad.

Dr Nick Woodall said: “At the time that we were teaching these courses, awake intubation wasn’t the mainstream technique that it is now and courses which allowed students to practice the technique were almost unheard of. Although initially some thought our methods were unconventional, teaching students in this way had some fantastic benefits, namely that they could understand the procedure from a patient’s perspective, having experienced it themselves.”

As part of a collaboration between DAS and the Royal College of Anaesthetists, Nick jointly led a national project to investigate the major complications of airway management in the UK. The project took almost six years to complete from inception to completion. A report and three papers were the result and these papers are now some of the most widely quoted anaesthesia resources in the world.

Nick added: “Over the course of my career in anaesthetics I have been privileged to witness some amazing advancements in technology, techniques and the treatments available for patients. I’m honoured that it is my peers who have selected me to be presented with this award.”

The NNUH has one of the largest anaesthetics departments in the country, with around 100 anaesthetists providing support to a total of 27 theatres, as well as critical care and pain relief services.

Dr David Spackman, NNUH Service Director for Anaesthetics said: “I would like to congratulate Nick on his success on behalf of his anaesthetics colleagues at NNUH. He is passionate about delivering excellence in anaesthetics and it is great to see that this has been recognised by the award of this prestigious medal.”

Mr Peter Chapman, NNUH Medical Director added: “This is a fantastic achievement for Nick and a credit to his years of hard work in the science of anaesthetics. He is an eminent speaker, an excellent teacher and a valued colleague; our hospital is privileged to have his skills and expertise within the Trust.” 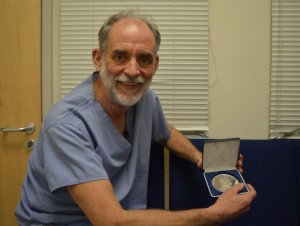